The never-ending debate on Brexit continues to polarise opinion with now the new PM adding to the fray. His request to the Queen to prorogue the UK Parliament has been treated with varying degrees of support or hostility based entirely on the already dived opinion line of Remain or leave. I wish the Remain camp would stop arguing their opposition is against no deal when they voted against a deal negotiated with 27 other countries. At least the Lib Dems are honest enough to admit that.

My concern is in the so called impartiality of figures who should know better and yet claim precedent or lack of it. But I’ll start with the BBC coverage and one headline in particular.
Yesterday BBC news and web site reported the following

“Pound Falls” is the less of a headline than BBC news which headlined at 18:00 “Pound crashes” on news. The web sites now has volatile rather than crashes. So what has happened to the pound this month – think I may have mentioned this before

No headline at all about the pound’s rise against the dollar in particular since the 6th August but a half cent drop on one day is a crash. What happened on the 6th? Not a lot as far as can tell. Personally it looks great as I’ve just had to buy some dollars for a forthcoming trip and I’ve had a better rate this week than last. When I heard crash I was worried my next purchase would be harder, but the headline means it must be not that I’m better buyting this week than I was at the start of the month – a real transaction by the way.

Really BBC – must do better

Now to the meat of the subject – sorry vegans the main point then… The word unprecedented.(dict’ definition never having happened or existed in the past

As in the Prorogation of Parliament is unprecedented or sometimes with the caveat of in recent history with no definition of recent which given nearly 1,000 years of Parliament is hard to judge. 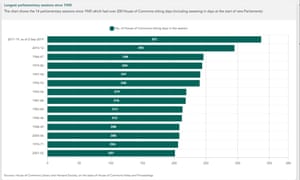 This is the amount of time for a parliamentary session i.e. the current session being prorogued is quite long and the longest since the World War II

The next use of unprecedented refers to the length of time Parliament is Prorogued in this case 23 days. If we caveat with recent. Then the longest most recent was 1997 for 19 days. There have  been much longer periods in history Elizabeth 1st the first had no sitting parliament for over 3 years. 23 days is not unprecedented. Many governments even since universal adult suffrage from 1928 (after the equalisation of the voting ages for men and women) have used various trick to get their plans through. This has included doing the opposite of now i.e. Prorogation and adding an additional session to prevent House of Lords interference (Labour 1948 to allow nationalisation of Iron and Steel without Lords amendment)  or as in the case of 1997, to prevent difficult questions in the House of Commons – The cash For Question Scandal.  In both cases the government did not resign nor was there an election. After the break there was a new Queen’s Speech and a new Parliamentary session as is proposed to start on 13th October which I believe is still before 31st October and therefore MPs still have time to pass or amend legislation.

the lack of historical context despite our long history continues to be troubling. The NOW generation infects our media reporting. We see this is numerous ways from sports results ignoring decades of previous results just because a competition name changed to the use of the word democracy but only when applied to the speaker’s narrow definition of the vote they mean. i.e Johnson is undemocratic because he replace May whereas Brown replacing Blair was democratic neither were unprecedented or undemocratic. they are the rules we have lived by for centuries.

In the case of Brexit the UK Sovereign Parliament voted to leave the EU (without a deal) on 1st Feb 2017 as the European Union Bill, supported by the Labour leadership, by 498 votes to 114. This remains the default legal position. Since then the same Parliament has rejected 3 times the negotiated deal and merely passed a delaying law now to 31st Oct or rather a delay requesting the EU to grant an extension.

2 thoughts on “Fake or Real News and Headlines”

This site uses Akismet to reduce spam. Learn how your comment data is processed.